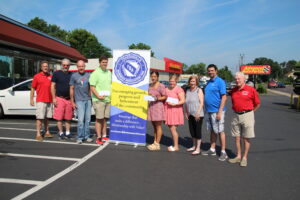 The Feasterville Business Association’s 2021 college
scholarship winners, all graduates of Neshaminy High School proudly display their
$1,000 awards which were presented at the Lower Southampton Township
Independence Day Parade breakfast held at the Suburban Diner in Feasterville,
PA. Sharing a proud moment are winners Patrick Handley (fourth from left) and
Arabella and Grace Thomson (fifth and fourth from right). Handley is going off to
St. Joseph’s University to major in history and secondary education, while the
twins are off to Bloomsburg University to study nursing. Also sharing in the
presentation are (from left) Mike Lesher and Don Rubin, FBA members, Ray
Weldie, chairman of the Lower Southampton Township Supervisors, Linda
Pupkiewicz, FBA scholarship committee chairperson, Fran Mishinkash, president
of the business association and Ed Shannon, Independence Day Parade chairman
and a Lower Southampton Township supervisor. Now is it its 72 nd anniversary
year, the mission of the FBA is to encourage growth and progress for the
betterment of the community. You can email the FBA at
FeastervilleBA@gmail.com or visit them on the web at www.feasterville.biz.